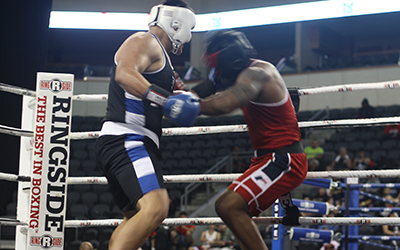 Once you’ve gotten past the basics and begin sparring, you may notice that the art of boxing is more than just standing toe-to-toe trading punches.

A fighter should enter the ring with an overall strategy and specific tactics to make that strategy happen. How you box in the ring, though, doesn’t just begin from a blank slate. You have to understand fighting styles, the kind that you use and the kind that your opponent will use.

There are many different fighting styles out there, but typically, most fighting styles fall into one of five categories: The Swarmer, The Brawler, The Out-Fighter, The Boxer-Puncher, and the Counterpuncher.

In our post today, we’ll focus on the Swarmer style.  Over the next few months, we’ll dive into each of the other four to give you a feel for the main fighting styles you might choose or see in the ring.

The Swarmer may be the most common fighting style out there. If done well, it can overcome a lot of physical disadvantages like reach and speed. The style also leads to a lot of punches being thrown and a lot of contact made. This makes it very effective for scoring points in Amateur tournaments, where KOs and knockdowns are rarer.

So let’s take a look a closer look at The Swarmer Style.

The Swarmer, also known as the Pressure Fighter or the Close-In Fighter, prefers to get in close to their opponent and then attack with a flurry of blows. They may not hit hard, but they will tend to hit fast and often once inside. This type of fighter will also tend to throw a variety of punches in order to circumvent an opponent’s defenses.

This style places a premium on good footwork. A Close-In fighter wants to place pressure on an opponent. They will advance constantly, shifting to the left or right to cut off escape, and shifting back to throw off counters. The close-in fighter requires solid footwork (and top level stamina) to move inside the reach of an opponent, deliver a series of blows, and step out of danger.

The Pressure Fighter also has to be more than just comfortable with the clinch. This fighter has to know how to use the clinch tactically to affect the flow of the match. The clinch can be used to move an opponent around the ring, interrupt an opponent’s timing, prevent combos, or slow down a fight.

The Swarmer Fighter: Why Fighters Choose It

There are a number of reasons that a fighter might choose the close-in style.

Negate Height Advantages – Shorter boxers often choose this style because it can negate the reach advantage of taller, longer-limbed opponents. Tall fighters often choose to keep opponents at range, striking from a distance and then dancing away.

Because the Swarmer seeks to get inside an opponent’s range, they can eliminate this advantage. At close-range, a taller boxer can’t punch as effectively, and may also have difficulty defending.

Control the Fight – More than any other style, the Pressure style focuses on creating openings, rather than waiting for openings to appear. A Swarmer’s aggressive style also tends to force opponents into a reaction mindset. Rather than operate according to their own rhythm and strategy, a Swarmer’s opponent may end up on the defensive, constantly looking for opportunities to escape to a safer distance.

Additionally, the Pressure Fighter knows how to use the clinch to control the fight. The Swarmer will enter a clinch to alter the speed and rhythm of an opponent. They might also clinch to physically alter the positions of both fighters relative to each other and the ring.

Overwhelm Defensive & Outside Fighters – Defensive fighters and fighters that prefer to fight outside can be overwhelmed by this style. A defensive boxer may face difficulty setting up counters if they are under a constant barrage (or pinned down against the ropes).

Likewise, an outside fighter’s tactical advantage disappears when an opponent gets inside their range.

The Swarmer Counter: How Should you Defend It

The simplest way to defend against a Swarmer is to be a Brawler-style fighter. A brawler relies on power and durability to take out opponents. They invite their opponents to get close, weather the storm, and then smash their opponents with powerful strikes. While this tactic may be simple, it is not easy if you haven’t specifically trained yourself over the years to use the Brawler style.

If you aren’t a brawler, then learn to use the clinch to your advantage. First, you need to push back against a Swarmer’s desire to control ring position. Lower your center of gravity and set your feet to resist your opponent’s efforts to move you around. Second, if your opponent has locked you into a clinch, let them carry your weight. This will force them to manage a heavy load while also trying to move you around or attack you. Over time, you will wear your close-in opponent out (and save your legs for later rounds).

Speed and footwork will also provide some of your best advantages here. Use your speed to maintain distance. Use your footwork to keep moving laterally, rather than just giving up ground by moving back.

Finally, use your fists to punish a pressure fighter who wants to enter into your range. Don’t let them get close without making them fight their way in. Don’t punch hard, but do punch often.

4 thoughts on “Focus on Fighting Styles, Part 1: The Swarmer”