A lot of boxing training is oriented on what’s in front of you. Running, jumping rope, shadow boxing, bagwork–all of it tends to focus primarily on linear movement forward and backward.

But when you’re in the ring, you don’t just move up and back, you step in all directions. And that’s where agility training for boxing comes in.

Agility training teaches your feet to step quickly and smoothly out to the side, without losing your balance. It also builds up the muscles that support these movements to reduce the risk of injury.

If you want to be able to slip and slide in all directions around the ring, then you need to incorporate some form of agility training into your routine.

Agility training, also known as lateral training, focuses on quick, side-to-side movements. If you’ve ever seen an athlete stop on a dime and then change direction, that’s agility training in action.

Lateral drills train your body to take smooth steps out to your side. They also improve your body’s ability to change direction quickly. Similar to plyometrics, lateral drills strengthen your legs’ ability to slow you down, stabilize you, and then accelerate you in a new direction.

How Will Agility Training improve my Ring Performance 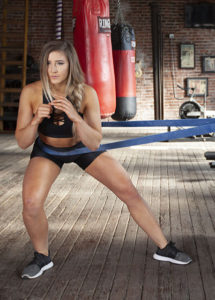 For boxers, agility training translates primarily into superior footwork. This is how you train yourself to “float like a butterfly”. If you’ve spent time mastering lateral drills, you will be able to quickly and confidently move in any direction without ever taking your eyes off your opponent.

Tactically, strong lateral ability allows you to confuse your opponent, avoid danger, or take advantage of suddenly breaking opportunities. You can change direction at will to be where your opponent does not expect you to be.

Mastering lateral training also helps prevent injury. Traditional training focuses on forward and backward movement. This leaves muscles and ligaments for lateral movement underdeveloped.  Without that development, a step to the side or a sudden change in direction could cause a rolled ankle or a torn ligament.

Agility training, develops the muscles and strengthens the structures responsible for lateral movement. You will reduce your vulnerability to the kinds of injuries that result from sudden, unexpected sideways movement.

Now that you understand the value of agility training for boxing performance, let’s take a look at some agility training exercises. Generally, these drills focus on strength, speed, or overall agility. To help add clarity, we’ve tagged each exercise with their primary area of focus. 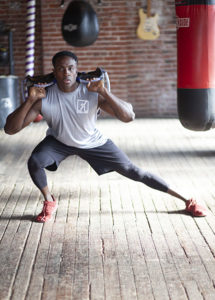 The side lunge is a great exercise for building strength in the outer muscles of the leg, hip, and glutes. Begin standing with feet about shoulder width apart. With one foot, take a big step out to the side. Bend the knee of that leg, in lower into a squat. Keep your other leg straight out to your side. When you get to the bottom of your squat, quickly push back up and bring your feet back together. You can complete your set on one side before switching to the other or alternate back and forth.

Doing these side steps with resistance will require either a standard resistance band or one that incorporates an ankle cuff. From there, the step slide is relatively simple. Begin with feet a little wider than shoulder width. Get into a low position and then take several steps (5-8 depending on your space) to the side. When you get to the end, reverse direction and take the same number of side steps back to your starting point.

Lateral jumps are going to help improve your leg strength and ability to quickly transition from one direction to another. Draw a line on the floor or place a low, relatively low obstacle on the floor. Stand with both feet together on one side of the line/obstacle. Keeping both feet together, jump to one side over the line, then jump back. Keep jumping back and forth until you complete your set.

The ladder sidestep is designed to to teach your feet to move quickly to the side while maintaining balance and coordination. You’ll need to pick up an agility ladder for this exercise. Don’t worry, this won’t be the only time you’ll use it.

For the side shuffle, you will want an area that’s about 15 feet long. Throwing cones down at each end of the course is a good visual cue for where you will want to start and stop. Standing at one end of your course, you’ll place your feet a little wider than shoulder-width. Then get into a low, squatting stance. Pushing off with the foot closest to the cone, you will shuffle sideways toward the far cone. When you get to the end of your course, come to a stop and then reverse direction, shuffling back to your starting point.

The 2-in, 2-out drill will help improve balance and coordination at high speed. Begin by facing the side of the ladder at the first box. Step into the box with the inside foot. Then bring the other foot into the box alongside the first. Step out with the first foot, landing in front of the next box. Bring your second foot out to stand next to the first. Continue to the end of the ladder. When you reach the end, reverse direction and return to your starting point.

The final drill will require you to work with a partner. The mirror drill will help prepare you to react to the movements of your opponent. Set up your cones about 5 feet apart. One person will be the “attacker” and the other will be the “defender”. For five seconds, the attacker will move back and forth, random;y, between the two cones. The defender will try to match the movements of the attacker for the entire five seconds. At the end of the time, you will switch roles.

Incorporating these exercises into your routine will give you the ability to dance around the ring. Agility training will also help you to prevent injury from the side-to-side movement that is a part of any fight.

I love to understand how things work. That's the reason that I found my first career path, as a Mechanical Engineer. But, I discovered, that once I understand it, I want to share that information with the world. And this has informed my second career path, as a digital marketer and writer. View all posts by Sean Cunningham